We were going to play a new event, Moresnet 1888. So I needed a new dress.

This Larp is set in Neutral Moresnet (now Belgium) in 1888. My character is an actress who has left Moresnet when she was young to seek fame and fortune in London. She comes back to visit her sister now and then. Her dress, I decided, would be a classic Victorian Day Dress, but the fabric would display that she is an actress.

I had some tartan fabric from when I bought it in Scotland years ago which was perfect. Pink and green! Those are actress-colors. And having had the idea of a checkered fabric, I immediately thought of a stunning dress I found on internet. It was a dress by Angela Clayton and it even turned out there was a pattern available. That posed a whole new challenge for me since I never have been able to work from a pattern, never learned it. But I dedided the dress was simply too stunning, I had to have it. 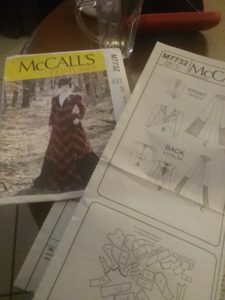 So I set out to recreate the skirt just from the pictures she put online, and ordered the pattern for the jacket. The pattern for the skirt was not hard to do, since it is an easy skirt with eight panels. The only complication was the inset with plaits. Cutting was a challenge since I wanted the checkers to be diagonal on the skirt, and have all the lines matching on the seams. This took a lot of fiddling. Luckily I had bought a lot of fabric in Scotland, since it required me to cut everything on the cross-grain as well as matching. I only made a mistake with the sleeves where the main green line was upside down. The picture shows how much loss there was in cutting the fabric this way. In the end it used up almost all of my 10 meters. With less than a week to go before the first event I raced to put the skirt together. Once again I cursed myself for including a plaited bit in the skirt since I do not like to do plaiting. But I am a sucker for plaits in a victorian costume.  The skirt was finished just 5 days before the event. 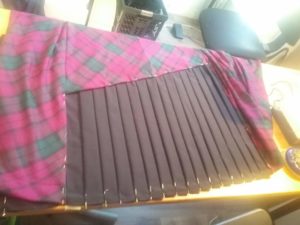 But now the pattern had arrived and, mad as I am, I started tracing and cutting for the jacket immediately. I should have known better, however. It took me two evenings to get my head around the pattern and one more to cut it. That left only an evening and a morning to put it together. Three hours before we had to leave my serger broke a needle and I started to make mistakes with the sewing. So I decided to throw in the towel, and leave without the jacket. I had other costume pieces to complement the skirt, so I could go and play Rebecca. Here is how she looked during the first event of Moresnet.

It took me two months after the event was played to get back to the jacket. It turned out I needed several days to complete the thing. Lining always gives me trouble and this one was rather fiddly with lots of panels. I fought so hard with the pattern and the sewing that I forgot to take pictures. Then came the fun bit, embellishments! There was some deep pink velvet ribbon in my stash to finish the edges with. When concidering whether to use this ribbon or the small lacey trim I had, I remembered this is a Victorian dress so I decided to use both. Finally I treated myself to some very nice metal buttons to embellish the jacket and skirt. 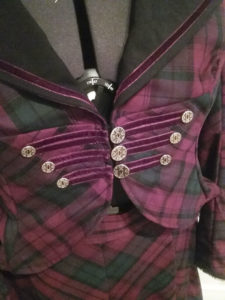 It is finished now, so in the next episode of Moresnet Rebecca will be in full costume. References: check out Angela Clayton’s video of her awesome dress.